What is the evidence that Jesus came back from the dead?

In previous parts of this series we have explored 6 evidences. Click below to visit these pages.

In Part 1 – The seal that was broken, the grave stone rolled away, the grave clothes left behind.

In Part 2 – The empty tomb, the evidence of the women, the lies of the guards.

Now we complete the picture with 3 final evidences that Jesus Christ was resurrected.

Evidence 7. The Appearances of Jesus

The Bible records that Jesus came alive after three days in the grave, and he was then seen by very many people.

The first person to see him after his resurrection was Mary Magdalene.

At first she thought he was the gardener. But as soon as he spoke her name, she knew it was him. She knew his body had not been stolen as she had feared, but that he had come back from the dead. (John 20:11-16)

The Apostle Paul made a list of those who had seen the risen Lord Jesus. 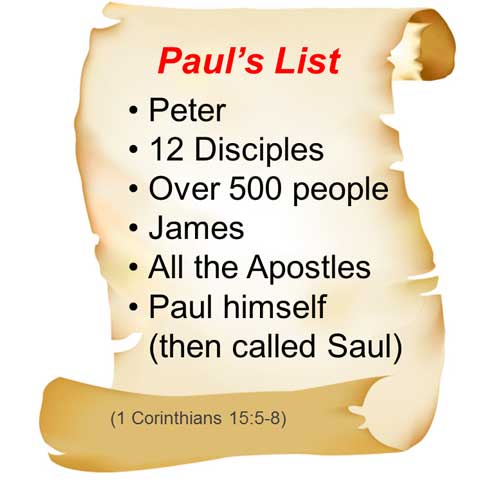 Only thirty years after the crucifixion, he wrote that the resurrected Christ had been seen by many people. (1 Corinthians 15:5-8)

It would have been impossible for Paul to get away with a lie, because many of those he claimed had seen the risen Christ were still alive and could have refuted what he said. Instead they agreed that Jesus had indeed come back to life.

Jesus was seen alive by far too many people for the truth to be covered up.

Originally they had lost all hope, were scattered, and in terrible fear. They locked the doors whenever they met. But suddenly they were different!

How did the disciples change after the resurrection?

A. They received the power of the Holy Spirit

They followed Christ’s instructions and went to Jerusalem to wait. Jesus had promised that the Holy Spirit would come to help them and empower them.

When the day of Pentecost came, they were all together in one place. Suddenly a sound like the blowing of a violent wind came from heaven and filled the whole house where they were sitting. They saw what seemed to be tongues of fire that separated and came to rest on each of them. All of them were filled with the Holy Spirit and began to speak in other tongues as the Spirit enabled them.”

Jesus had kept his promise! Because of the power that the Holy Spirit gave them they were no longer hiding in fear and trembling.

The disciples received God’s power to preach, heal, and deliver people from the power of evil spirits—just as Jesus had told them would happen. (Acts 1:8)

B. They preached boldly in public

They immediately went public with the message that Jesus was alive! Nothing would stop them.
After one open-air sermon preached by Peter, about 3,000 people put their trust in the living Christ for salvation.

C. They were not put off by opposition

Despite threats and death sentences they stayed in Jerusalem and preached their message there.

D. They changed the main day of worship

The special day of the week on which they worshipped God changed from the Jewish Saturday Sabbath to Sunday, commemorating the day Jesus rose from the dead.

Nothing could have brought about these massive changes in the disciples except the resurrection of Christ and his continued power.

Some people had staunchly believed that Jesus was an ordinary man, and was now dead. After the resurrection they had a complete change of heart.

Saul was a persecutor of Christians.

He did not believe that Jesus was the Messiah (the person God had promised would come to save people from the punishment of their sins).

He rounded up the followers of Jesus, imprisoned them and even approved when they were killed.

Yet, when he met the risen Lord Jesus he believed that Jesus was real and alive, and Saul acknowledged him as his Lord.

He never turned back from following the risen Lord Jesus. Even when he was persecuted and tortured.

His experience of the living Christ — not only on the road to Damascus, but through his whole life — had totally changed his unbelief to a deep, lasting faith.

Mary was his mother and Joseph his father.

James was very fixed in his ideas, until he saw Jesus alive after his resurrection (1 Cor.15:7).

Then, like Paul, he became a loyal follower of Christ and a leader in the Christian community (Acts 15:13,19).

He wrote the Epistle of James and finally was martyred for his faith.

Only the resurrection of Christ could have turned such hardened unbelievers into faithful followers of the living Christ.

The evidence has mounted up.

In this post we have examined 9 very powerful pieces of evidence which show that Jesus really did come alive again after he had died on the cross and been buried.

Here they are again to think about. Click on an item to go to a full explanation.

No one would have dared risk interfering with a Roman seal. Yet it was broken. Who could have done that?

2. The stone moved away

The massive rock was too heavy for men or women to easily roll away. And besides, it was found far away from the tomb. Who could have moved the stone?

3. The grave clothes left behind, uncut

Why did the authorities not simply produce the body of Jesus to prove he had not come alive again? They could not!

The Bible says that they were the first to find the tomb empty and a woman was the first person to see Jesus alive again.
When the culture of the time made women second rate, why does the Bible give them such an important place in the account of Jesus’ resurrection? No liar would have done that.

The authorities bribed the Roman guards to say they had fallen asleep on duty. Why were these guards not punished? And why did the Roman and religious leaders have to organize such a cover up?

7. The appearance of Jesus alive again

So many people saw Jesus alive again, in so many different places and at different times. If you had that many eye-witnesses in a court today, telling the same things, it would be accepted as the truth.

8. The disciples transformed by God’s power

From fearful to bold. From weak to empowered by the Holy Spirit. How else could they have been totally changed, except by the living Christ?

9. Unbelievers who totally changed their minds

Saul and James did not believe in Jesus. They were opponents of Christ. Yet when they saw him alive, they believed he was God’s Son and never wavered in their belief after that, even though they were persecuted and killed for what they believed.

In the light of these evidences, we can be sure that Christ rose again from the dead and is alive today.

A free PowerPoint covering  all the teaching in this series is available for you to download. With over 70 slides it covers all 9 evidences of the resurrection of Jesus Christ. It is colourful and well illustrated.

The Resurrection Factor by Josh McDowell

Regarding the folded napkin, Khen Lim has a full discussion of The Controversy over Jesus Folding the ‘Napkin’

For a full list of post-resurrection appearances of Christ, see Don Stewart’s article entitled To Whom Did Jesus Appear after His Death?