What is the evidence for the resurrection of Jesus Christ?

In part 1 of this series we looked at a broken seal, the stone that was rolled away, and the grave clothes left in the tomb.

This post will deal with three more evidences of the resurrection of Jesus Christ. 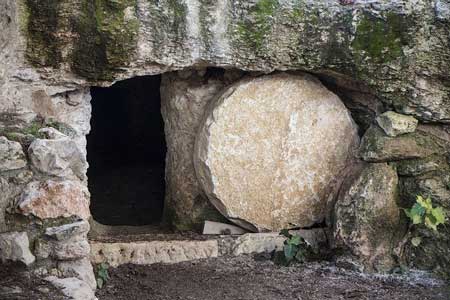 Most people at the time of Jesus’ resurrection accepted that the tomb was empty. Even the enemies of the Christians did not try to say that Jesus’ body was still in the grave.

When the disciples preached about the resurrection of Jesus, the authorities tried to contradict them.

But if Jesus had still been dead, they could easily have proved the disciples wrong. All they needed to do was produce the body of Jesus!

But they didn’t, because they couldn’t. The body was no longer in the grave. That tomb was now empty!

Both Jewish and Roman documents and traditions agree the grave was empty.

Gamaliel, who was a member of the Jewish high court, the Sanhedrin, suggested that the rise of the Christian movement was God’s doing; he could not have done that if the tomb still had the dead body, or if the Sanhedrin (the Jewish religious leaders) knew where Christ’s body was.

Josephus was a first century Jew who wrote history for the Romans.
The Romans were hostile to Christians, so the fact that Josephus recorded the detail of the empty tomb is evidence that it could not be denied.

The tomb must have been empty on the Sunday.
No one has ever produced evidence to prove otherwise.

The facts add up!

A. Women were considered very inferior in Jewish society.

B. Women were not allowed to give evidence in court.

They were considered unreliable witnesses. What they had to say would only be worthless, the Jewish men said.

C. Yet it was women who first found the tomb empty!

When the Sabbath was over, Mary Magdalene, Mary the mother of James, and Salome bought spices so that they might go to anoint Jesus’ body. Very early on the first day of the week, just after sunrise, they were on their way to the tomb and they asked each other, “Who will roll the stone away from the entrance of the tomb?” But when they looked up, they saw that the stone, which was very large, had been rolled away. (Mark 16:1-8 NLT)

D. It was to a woman that the resurrected Jesus first appeared.

The women told the men, who didn’t believe them at first and thought they were crazy! (Luke 24:9-11)
Surely, if the disciples had wanted to spin a story to convince everyone that Jesus was now alive, they would not have chosen women to be the first witnesses!

E. No men would have deliberately embarrassed themselves like that!

This shows that the gospel accounts are true, because in the culture of that time no men would ever have given a false account so embarrassing for themselves, by saying women were the ones who first discovered the empty tomb.

The Roman soldiers on duty at the tomb of Jesus were disturbed on their watch.

What was it that so alarmed them?

First here was an earthquake.

The soldiers were so afraid of the angel that they shook with fear and fainted with fright.
(Matt. 28:4)

This troop of elite soldiers had faced many scary experiences before, but not this!

So they reported to the people who had arranged for them to be on guard duty at the tomb.
Some left their post to go and tell the Jewish authorities what had happened. (Matt 28:11).

No self-respecting Roman soldier would have made up this report. It was too embarrassing for these fighting men. Their report must have been the truth.

The religious leaders acted fast.
They bribed the soldiers to lie, to say they had been sleeping and that during that time the disciples had stolen the body. (Matt 28:11-15).

The story got around very quickly. But people must have had many questions.

There were three things which made the soldiers’ lie totally unbelievable!

1. How did they avoid the death penalty?

The punishment for a Roman soldier who fell asleep on duty was execution. Everyone would wonder how they were still alive to tell this fake story.

2. How could every soldier fall asleep at the same time?

There were probably 16 guards in this troop. Usually they took turns to be on watch, four at a time. The earthquake must have woken up those who were sleeping. How would a whole unit of guards fall asleep at the same time? It doesn’t ring true!

3. How could they see what was happening if they were all asleep?

If they were all asleep, how could they have possibly seen the disciples—or anyone else, for that matter—stealing the body?

It was all a big lie! The resurrection must have really happened, or else why did the authorities lie to try to cover it up?

In the final part of this series on the Resurrection of Christ, we will see three more evidences that Jesus rose from the dead.

Our free PowerPoint covering the teaching in this entire series is available for you to download. With over 70 slides it covers all 9 evidences of the resurrection of Jesus Christ. It is colourful and well illustrated.

Regarding the face napkin –
https://hosannaefcluxmundi.blogspot.com/2017/04/the-controversy-over-jesus-folding.html

For a full list of post-resurrection appearances of Christ, see https://www.blueletterbible.org/faq/don_stewart/don_stewart_814.cfm