What is the evidence for the resurrection of Jesus Christ?
What do Christians believe happened to Jesus on that first Easter weekend?

• Christians believe that Jesus was arrested, tried and crucified.
• That the body of Jesus was placed in a tomb.
• That the tomb was sealed with a great rock.
• That three days after his death and burial, his grave was found to be empty.
• That Jesus had not stayed dead, but had come alive again

These beliefs are the foundation of Christianity, which spread throughout the world, starting first in Jerusalem, where all this happened.

So, what is the evidence for this belief that Jesus came back to life after his death?

The people in Jesus’ homeland were under Roman occupation and law. Pontius Pilate was the Roman governor at the time.

He was asked by the religious leaders to supply a guard and seal the stone. They had remembered Jesus saying that he would rise from the dead after three days.

So the Jewish leaders told Pilate, “His disciples may come and steal the body and tell the people that he has come back to life.”

What was done to the body of Jesus after his death?

A. His body was placed in a tomb.

The disciples anointed and wrapped the body, but couldn’t quite finish as the sabbath was near, when no one could work.

The grave was like a cave dug out from the side of a hill. A huge stone was then rolled in front of the entrance.

B. The stone was sealed

A cord was stretched across the boulder and pressed into clay or wax at each end. This would not stop anyone getting in, but if someone tried to interfere with the stone, the cord or seal would be broken and immediately noticed.

C. A guard was placed at the tomb.

The soldiers at the grave were crack troops!
The word translated “guard”, from the original Greek Bible is kustodia. The Romans spelt it custodia, from which we get our English word “custodian”, which means someone who takes care of something and looks after it.

The use of this particular word shows us several things:

• They were not Jewish temple guards
• They were Roman soldiers. This is very important, because…
• The Roman army had highly disciplined and skilled soldiers at the tomb.
• Interfering with the Roman seal meant the death penalty.
• So, NO ONE would dare to break the seal!

The followers of Jesus knew that if they were caught, it meant automatic execution by crucifixion. We know they were very afraid of what might happen because later, when they saw the seal had been broken, they hid away.

Evidence 2. The stone was moved

The tombs in that region were like caves cut out of the rocky hillside.

The opening of the cave-grave was covered by a massive flat circular stone set in a sloping groove. The stone was wedged, and when anyone wanted to cover the entrance, they knocked out the wedge and the stone rolled down the slope by itself.

At that time there was also another form of boulder used in some Jerusalem graves – not a flat disc rolling in a groove, but a solid cork shaped boulder, rammed into the entrance. Both methods of closing a grave meant several men heaving a tremendously heavy rock.

Archaeologists have examined the geology, the underlying rock of the Jerusalem area, and also the style of grave stones of the era of Jesus’ death. They have calculated that the weight of the average stone would have been between one-and-a-half tons and two tons.

That is the same weight as a small elephant, or as heavy as a car. But of course, the stone had no wheels to help push it along! It would have needed several men to move the stone back up the sloping groove and wedge it again it.

But something strange and wonderful amazed the people who came to the tomb on resurrection Sunday.

Not only had the stone been moved away from the entrance of the grave, but it was left a great distance away . All four Gospel writers mention this.

The Greek words used in the Bible accounts have the meaning that the stone was not rolled only a little way, just enough for someone to get in or out of the burial place. But that it was rolled a long way—completely away from the tomb area.

But who would roll away the stone from in front of Jesus tomb?

A. Was it the Jewish leaders or the Roman authorities?

No, because neither wanted Christianity to become more popular.

The Roman authorities knew that Jesus had predicted he would come to life three days after dying, so they wanted to keep his body there. That’s why the entrance was sealed (Matt. 27:62-66).

The religious leaders wanted to prevent the followers of Jesus stealing the body and hoaxing people with a fake resurrection.

B. Did the disciples move the boulder?

No. They knew the tomb was guarded by a crack squad of fighting men. They would have been too afraid of the Romans. And anyway, even if the men had done it, they mustn’t have told the women.
We know this because the women went on the Sunday expecting to find the body and complete the funeral arrangements (John 20:1-2).

C. Was it the women who opened the tomb?

No. The women could never have managed it by themselves. While they were going to the tomb on the Sunday morning, they were wondering who would roll away the heavy stone for them. (Mark 16:2-8). They fully expected everything to be as they had left it before the sabbath.

It definitely wasn’t the authorities, the disciples, or the women who removed the stone. So, who did roll away the stone?

The reason that the stone was rolled away was NOT so that Christ could come out of the tomb. He didn’t need the entrance to be opened.

With his resurrected body he could pass right through the stone, as he did later when he came into the locked room where the disciples were. (John 20:19)

The reason God had the stone moved away was so that people could look into the tomb and see that Jesus’ body was not there—and also to see something else amazing.

What they saw was the third piece of evidence that Jesus had come alive again.

The grave clothes left behind after Jesus came alive are powerful evidence of his resurrection from death.

At that time the people at the funeral took cloth, and starting at the feet they tightly wound the cloth round and round the body, like a huge bandage.

As they did this they poured on about 100 pounds weight of spices and ointments. These dried and hardened into a sort of “cocoon”. The cloth for the face was put on separately.

The Bible in John 20:6-9 (Amplified Bible) explains what was left in the tomb after the resurrection of Jesus

Then Simon Peter…went into the tomb and saw the linen cloths lying there. But the burial napkin (kerchief) which had been around Jesus’ head, was not lying with the other linen cloths, but was still rolled up (wrapped round and round) in a place by itself. Then the other disciple, who had reached the tomb first, went in too; and he saw and was convinced and believed.

Why are the grave clothes so convincing as evidence that Jesus came alive?

A. The cloth was not cut open

If anyone wanted to steal the body, they would have to cut open the cloth that was now stiffened with the gum and spices like a hard cocoon. They would have to pull back the material enough to get the body out. In that case, the grave clothes left behind would be damaged. They were not.

B. This proved that no one stole the body.

C. No ordinary person could recover consciousness inside the grave clothes and then get out.

Even if Jesus had not died, but regained consciousness in the grave, if he had been an ordinary man he would have been able unable to release himself.

Jesus once brought a man called Lazarus back from the dead. When Lazarus came out of his grave, Jesus told the men there to take the grave clothes off him, because he needed help to get out of them (John 11:44).

So to find the grave clothes of Jesus not cut apart, but still intact and wound up, without the body in them, was amazing. It was proof that he had come alive again, with a new body which could pass right through the grave clothes, leaving them intact, then through the boulder at the entrance to the tomb. 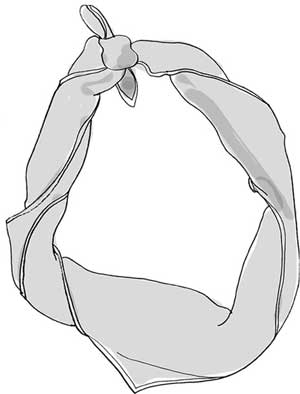 Another very important detail was the wrapping for the face. This was a separate piece, and it was found not bundled with the other cloth, but set apart.

“But the burial napkin which had been around Jesus’ head, was not lying with the other linen cloths, but was still rolled up (wrapped round and round) in a place by itself. (John 20:6-9 Amplified Bible)

The Greek word entulisso translated in the King James Version of the Bible as “wrapped together” actually means to “twist or roll round”. This is how the napkin would have been used on a dead body—rolled, placed under the chin and tied on top of the head. The original language in the passage suggests that it remained still in its roughly circular form, just as it would be on the head of the dead Jesus.

Extra note: There have been several articles online and elsewhere, suggesting that the napkin was folded (not rolled) and that this was a significant symbol — a message to the disciples that Jesus had unfinished business and would return.
It is suggested that this has to do with a Jewish cultural practice with a napkin at the dinner table. This has been thoroughly refuted by eminent Jewish scholars. A link to further details of this is in the list of reference material at the end of this post.

So, from the evidence we have seen so far we can see that:

The remaining two posts in this series will cover another 6 evidences.

Evidence for the Resurrection of Jesus Christ – Part 2

Evidence for the Resurrection of Jesus Christ – Part 3

A free PowerPoint is available for you to download. With over 70 slides it covers all 9 evidences of the resurrection of Jesus Christ. It is colourful and well illustrated.

Regarding the face napkin –
https://hosannaefcluxmundi.blogspot.com/2017/04/the-controversy-over-jesus-folding.html

For a full list of post-resurrection appearances of Christ, see https://www.blueletterbible.org/faq/don_stewart/don_stewart_814.cfm